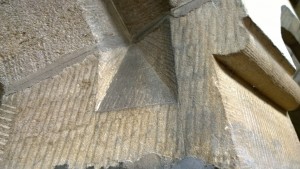 We were recently invited to deliver a keynote address at a conference on Lines in Early Modern Europe organised by the Centre for Renaissance and Early Modern Studies at the University of York- which was a very interesting day in general. This is an evolving discipline, offering a new conceptual framework within which to think about our cultural heritage- in considering how the structure of both material and immaterial things (the formal layout of an early printed text or a building, the construction of poetry, prose and its performance on stage) was influenced by a particular approach to space- and by the use of lines, both physical and symbolic, to delineate this space- and how this in turn shaped our perception and understanding of these things. We focused on the early modern period in particular, but of course lines and linearity define masonry from its inception….